[(1) A person, firm or company cannot be convicted of the criminal offences of scandalising the court or interfering with the administration of justice unless the facts establish beyond a reasonable doubt that there was a real risk, as opposed to a remote possibility, that the acts complained of would undermine public confidence in the due administration of justice in the minds of at least some of the persons who were likely to become aware of the acts complained of.

(3) Upon the assumption that making the scandalising of the court a criminal offence amounts to a restriction on the right of freedom of expression, that restriction was

(b) necessary for the achievement of that objective.

Accordingly, the criminal offence of scandalising the court has not been abolished or modified by the Bill of Rights.]
(The Secretary for Justice and The Oriental Press Group Limited and Others HCMP000407/1998)

1. The Oriental Daily News is the most popular newspaper in Hong Kong. Towards the end of last year, it embarked on a campaign against the Judiciary. The campaign has resulted in these proceedings for contempt of court. So far as we know, this is the first prosecution in Hong Kong's legal history of a contempt of court consisting of "scandalising the court" and "interfering with the administration of justice as a continuing process".

2. The gravity of the alleged contempts is reflected in the language which leading counsel for the Secretary for Justice chose to use in the course of his submissions:

"This is the most serious and flagrant contempt that Hong Kong has known. The attack on the judiciary was as unprecedented as it was persistent. For over a month, the people of Hong Kong were spoon fed with daily repetitive dosages of scurrilous abuse of not just one or two judges but the entire judiciary. The ultimate unparalleled challenge to the rule of law [took] the form of an 'educational' paparazzi trail which followed one of our appeal judges for 3 days around the clock." 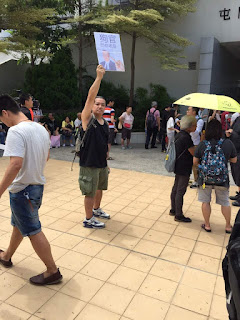 藐視法庭的檢控，並非法官個人榮辱的問題，而是要防止司法工作受到不當影響。(The object of the discipline enforced by the court in case of contempt of court is not to vindicate the dignity of the court or the person of the judge, but to prevent undue influence with the administration of justice. The question, therefore, here is whether there has been an interference with the administration of justice. )(英國案例Helmore v. Smith (No. 2) 1886 35 CHD 449)

事有湊巧，2011年李克強訪問港大引發李成康投訴被警方包圍，當時陳文敏教授指責警察非法禁錮李成康，為這件事，我在4年前也寫過一篇：李成康的禁錮事件。兩件事本質不一樣，行為卻沒兩樣。看下法律典籍對非法禁錮的介定：
False imprisonment is a common law offence. It consists of the unlawful and intentional or reckless restraint of a victim's freedom of movement from a particular place - it is unlawful detention which stops the victim from moving away as he or she would wish to move. There is no requirement for "incarceration" in the accepted sense of that word. It is sufficient if the citizen's freedom to leave the particular place is totally and unlawfully taken away.
(para 20-355 Archbold Hong Kong 2007)(原諒我無新版Archbold，$7000一本的書我買不起)


Crown prosecutor Margaret Cunneen has criticised the powers of the Independent Commission Against Corruption as "extraordinarily draconian" after a decision by NSW authorities not to charge her over allegations she had tried to pervert the course of justice.

Two days after the decision to not prosecute her over allegations she advised her son Steven Wyllie's girlfriend, Sophia Tilley, to fake chest pains to avoid a breath test after a car accident the couple was involved in last year, Ms Cunneen blasted ICAC for the quality of its investigation.

"Even the most elementary investigative step of speaking to any of the kind bystanders who helped Sophia from the wreckage would have revealed that she was being treated in the ambulance before the police arrived," Ms Cunneen told Fairfax Media.

"She didn't say a word to the police at the scene so she certainly didn't tell them any lies. She was taken to hospital and routinely blood-tested with a 0.00 result."

Ms Cunneen - who has always strenuously denied the allegation - said it "was always an impossibility on its facts".

It was "a dreadful thing that this young couple, and Sophia in particular, having just survived a devastating crash in which she was not at fault, would be subjected to the extraordinarily draconian powers of ICAC which extend way beyond those of the Police or the proper courts."

As part of its investigation ICAC last year issued warrants to seize the mobile phones of Mr Wyllie, Ms Tilley and Ms Cunneen. The trio was also called to give evidence to the commission in private hearings.

"These powers should be reposed in only competent and scrupulously impartial hands and reserved for the most serious of criminal matters," Ms Cunneen said on Sunday.

Later, speaking on radio 2GB, Ms Cunneen said that "if this could happen to me ... then it can happen to any citizen and any family".

"I'm fortunate, I know a bit about the law and hundreds if not thousands of lawyers, many of whom have been of assistance to me," she said.

"But if this happened to any other family without those resources, they'd just have to cop it".

The ICAC had referred evidence to the NSW Director of Public Prosecutions relating to the allegation against Ms Cunneen.

The referral followed a successful High Court challenge by Ms Cunneen against ICAC proceeding with public hearings into the matter. The court found ICAC was acting outside its powers in investigating Ms Cunneen.

Given Ms Cunneen's role in the NSW legal profession, the NSW DPP asked the Victorian Chief Crown Prosecutor to advise on the matter.

On Friday, NSW Solicitor-General Michael Sexton said he had considered the advice of the Victorian Chief Crown Prosecutor in forming the view no prosecution should be brought.

The ICAC has declined to comment on the decision, which comes as former chief justice of Australia Murray Gleeson and senior barrister Bruce McClintock prepare to hand their review of ICAC's powers to Premier Mike Baird on Friday.

The review was commissioned by Mr Baird following the High Court decision which found ICAC did not have the power to investigate Ms Cunneen.

SL留言另一看法是：If ordinary citizen doing such act with such force in street will be prosecuted absolutely. 現實是否這樣呢？

匿名2015年7月17日 下午6:15
What do you think about P K Chan's Verdict? A woman assaulting the police with her breast (do you know of any woman on Earth who would assault a police officer with her breast)? Even Time Magazine reported the joke.

A court in Hong Kong Kong convicted 30-year-old Ng Lai-ying Thursday of assaulting a police officer by hitting him with her breast during a protest on March 1.

Ng testified that during the protest the officer had reached out his arm to grasp the strap of her bag and that his hand had come in contact with her upper left breast, the South China Morning Post reports.

She told the court that she immediately yelled, “Indecent assault!”

But in his decision, the magistrate rejected those allegations, accusing Ng of lying in her testimony and instead finding her guilty of using her breast to bump the officer’s arm. “You used your female identity to trump up the allegation that the officer had molested you. This is a malicious act,” he said.

There was no word on what physical injuries, if any, the officer suffered.

留言者繼而問我:I wonder if the decision would be different if the magistrate is a female. 這問題不難答，也不好答，因為法官不論男女都應有公正裁決，但一件案審結了，除非找個女官來重審，否則也不會看到另一番結果。就算由女官來審，結果一樣，也可以有别的wonders。我湊巧答了這問題，但最後刪除了，都怪瘋狗Maro，他看了我的回覆就瘋罵，由裁判法院罵到終審法院。他已瘋到這程度，我只好不論好歹把他新的留言都刪除了。我講明會刪他的留言，他還厚著臉皮，刪完再留。他早幾天另一則留言給我刪了，他說控辯雙方都代表過，只是沒做過法官。我保留著他的留言，他朝有日他做了法官，我一定會送個花牌給他做賀禮，貼上這些刪掉的留言，再標以「狗官」賀他。當然，他要發春秋大夢才能當上狗官。
發佈者： 標少 於 下午4:34 20 則留言:

如果當時主控話：大人，控方申請押後3日作進一步調查，反對被告保釋，被告還押警方看管。(Your Worship, may the case be adjourned for 3 days for further enquries. May the defendant be remanded in police custody.)你估聽起來是否好聽一點？而不會給法官一個幫警察手查案的感覺呢？Peter Law在處理這件案時的反應大了一點。毫無疑問法庭要公正中立，但警方查案也需要時間，警方扣押犯人受時間的限制，只能向法庭申請延續，法庭怎算幫警察查案呢？譬如警察向法庭申請搜查令，繼而撿走被告的電腦，法庭又算不算落個命令幫警察做嘢而表現不公正呢？

Steel is now cheaper than cabbage in China, as weak demand and over-production continues to undermine the end market for Australian iron ore and coking coal.

Despite a water content of more than 90 per cent, respected commodity price index publisher Platts revealed that cabbages were pricier by the tonne than the most popular type of steel, known as hot rolled coil steel, which is used to make industrial pipes and some vehicles.

In a note on steel prices this week, Platts noted that when measured by the ton, the wholesale price of white round cabbage in Shanghai was about 6 per cent more expensive than a tonne of hot rolled coil.

Record cattle prices are threatening to push steak off the menu and take the sizzle out of beef sausages.

Some beef cuts have spiked by as much as 50 per cent in the past six months thanks to strong overseas buying – driven partly by the softening Australian dollar – and drought conditions.

4. Later that afternoon, the applicant informed hotel reception that he had forgotten the combination number of the safe in his room. Two staff members then attended the room and used a decoder to open the safe for him. That evening, the true occupant of Room 2316 returned to his room and reported that items worth a total of HK$23,800 had gone missing from the room and the safe. They were a laptop computer, a computer bag, a USB memory stick, a wallet, six credit cards and a pen (Charge 1). None of the property has been recovered.

5. On the morning of 12 July 2013, when a cleaner was cleaning Room 5033 of the Disneyland Hotel, the applicant appeared claiming to be the occupant of the room and then waited outside the room for the cleaner to complete his work. When the cleaner had finished his task, he shut the room door and asked the applicant to open it with his room key, which the applicant did after a failed first attempt.

6. Later that morning, posing as the occupant of the room, the applicant informed the house-keeping manager that he had forgotten the combination number of the safe in the room. A staff member duly arrived to open the safe for the applicant with a decoder. That evening, the true occupant of the room returned and reported to the hotel that he was unable to open the safe as the combination number had been altered. When the safe was eventually opened with the help of the hotel staff, the occupant discovered that a quantity of cash had been stolen. The exact quantity was later admitted under caution by the applicant upon his arrest to have been US$1,200 and 1,000 Indian Rupees (Charge 2). None of the property has been recovered.

7. The applicant then left Hong Kong using his Columbian passport on 13 July 2013.

8. On 17 September 2013 the applicant returned to Hong Kong and entered the territory using a forged Mexican Passport in the name of Mendoza Vega Noe, which he presented to an Immigration Assistant (Charges 3 and 4).

9. When the applicant had committed the offence at the Peninsula Hotel on 7 July 2013, his image had been captured by the hotel CCTV system. Still-photographs showing the applicant’s appearance were developed from the CCTV footage, which were then sensibly circulated to the security personnel of various Hong Kong hotels.

11. The police seized the forged Mexican passport at Chungking Mansions in Nathan Road, where the applicant had been staying after entering Hong Kong on 17 September 2013.